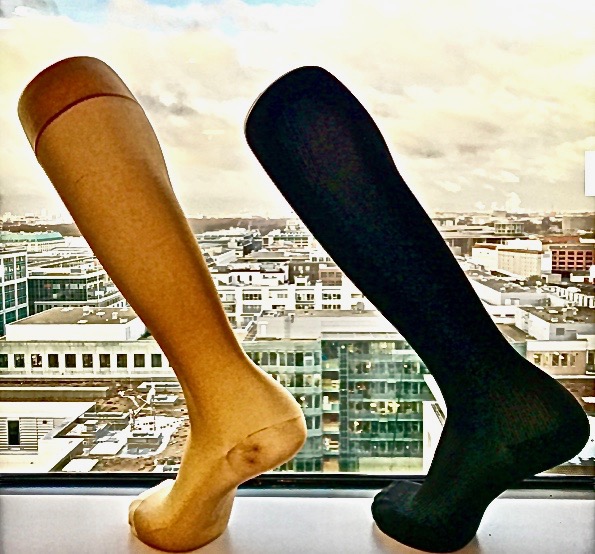 There is a close relation between venous and lymphatic outflow from the legs, so that the venous system, lymphatic system and the extracellular space in the overall picture of the so-called low-pressure system form a functional unit. About one-third of the total filtration volume is regulated by the lymphatic vessels. If there is a disruption of the connection veins acting as safety valves (in the context of varicose veins formation), initially venous edema develops followed by lymphedema.

Orthopedic diseases (spreading / lowering foot, ankle arthrodes, etc.) can also be a cause of the disturbance of the reflux, as well as inborn venous wall weaknesses. The resulting varicose veins lead via the same mechanisms to irreversible damage to the entire peripheral low-pressure system. It develops a venous backflow with permanently increased capillary pressure of approx. 100 – 110 mmHg. This permanently increased capillary pressure thus disturbs the entire local microcirculation. This results in venous edema, followed by lymphedema with disturbances in the transport capacity of both systems. Primarily chronic venous stasis develops into chronic venous insufficiency and later lympho – venous insufficiency. The consequences are severe damage to the skin, slowing of the blood flow, injury to the inner walls of the veins and increased coagulability of the blood with the risk of thrombosis of the deep veins. In addition, the o.g. Symptoms Heavy feeling, tendency to swell, restlessness in the legs and rest cramps are extremely stressful for the working person. Thus, there is a need for symptomatic and prophylactic therapy.

In last years, a noticeable change in the indication for compression therapy has occurred in professional circles. Still 5 years ago, the principle to prescribe compression stockings of class 2 and lymphoedema class 3 for each varicose vein, today is rather the opposite. We move away from the inconvenient, heavy-wearing, restrictive, ill-fitting and tight compression stockings to lighter forms of compression. This applies both to compression alone and to compression after therapeutic procedures on the venous system.

Compression class 1-2 in mild CVI, after microfoam and endovenous therapy of the varicose veins.

We began 3 years ago to change our prescription regime to treat patients with mild CVI and after endovenous procedures using microfoam or vein glue with the class 1 compression stocking, which is more comfortable and subjectively much more comfortable. Of course, this „downgrading“ always depends on the individual clinical findings of CVI and varicosis, but we have received positive feedback. In equally good postoperative courses, the patients report much more positively, no longer complain of pressure pain and problems when wearing the tighter stockings, Also, the difficulties of the elderly patients when putting on the stockings are no longer evident. For lymphatic and lipoedema, we now prefer compression class 2 and additionally prescribe regular lymphatic massages or perform them ourselves.

Compression as a prophylaxis for sitting/standing occupations

The Saphenion Protocol: Compression primarily sees a prophylactic effect of compression therapy. All patients with sitting or standing professions or also with pronounced travel activity via airplane receive from us compression stockings between 17-20 mm Hg. These are offered by different manufacturers as so-called travel stockings also already.

For two years now, we have noticed a significant increase in interest in our two venous centers. The patients are extremely satisfied with this new type of compression stocking therapy and describe the positive effects in an impressive way.

We have had excellent experiences with the football team of the Rostock Griffins. Both the willingness to perform and the training intensity could be increased. In addition, there were significantly fewer injuries to the muscle/ligaments of the legs in the period of our studies!